Tuesday morning, October 20. I am guest of the Research Group of Speech and Language Technology At NLPR, CAS (Chinese Academy of Science). They are working on automatic translation, name-entity extractions, speech to speech translation. Prof. Chengqing Zong, one of the group leaders in the lab, gave us an introduction to the work of the and 2 demos of systems. NLPR by itself is amazing. More than 200 researchers in 5 research groups. Strong international contacts, among other to Carnegie Mellon University, University of Karlsruhe and The CNR IST in Pisa.

The first demo was on Machine translation and we used the same exemple as at Harbin Institute of Technology. Results are interesting. The overall translation was better than at the Harbin exemple, but there was strange conversion of sense in the first sentences. 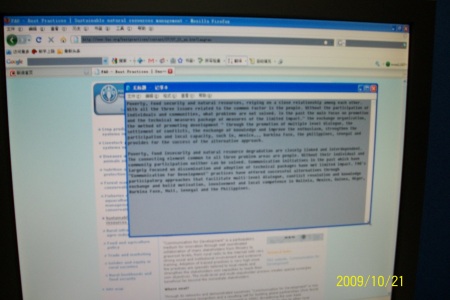 Anyway all these systems need training for doing a proper job. Asked about his judgement of Google translation compared to their own systems Prof Zong said that sometimes their systems is better, sometimes Google does a better job, a global judgement would be difficult. They have no attention to publish their software. It has been developed and is used for research purposes.

Another demo was on Name-Entity recognition in Chinese text with translation into English. Specifically the tool was extracting Chinese Institutions and translated them into English displaying a list of all institutions in the text, Very interesting and surely something Thomson/Reuters could be interested in for Open Calais.